Tanzania is a large country in Eastern Africa within the African Great Lakes region. Parts of the country are in Southern Africa. It is bordered by Kenya and Uganda to the north; Rwanda, Burundi, and the Democratic Republic of the Congo to the west; Zambia, Malawi, and Mozambique to the south; and by the Indian Ocean to the east. Kilimanjaro, Africa’s highest mountain, is in north eastern Tanzania.

Tanzania is a special destination when it comes to wildlife safaris in Africa, and Tanzania safaris are open for all people and its ranked among the best destination for budget wildlife tours.
All wildlife safaris to Tanzania are done in the northern Circuit due to the fact that all wildlife national parks like Arusha National Park, Tarangire National Park, Lake Manyara National park, Ngorongo creators, Serengeti National Park are found in this section .
Tanzania safari tours make for exceptionally memorable and intimate honeymoons, as well as the most treasured family holidays.  A true treat for animal lovers, bird-watchers, nature lovers and anyone who appreciates a little luxurious pampering.Book a wildlife tour to visit wildebeest  migration & gorilla trekking on a combined tour with Primate Safaris Rwanda like 6 Days Serengeti & gorilla safari.

Get 5 % Off on Tanzania Safaris 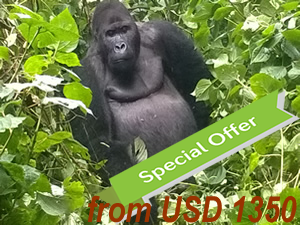